"Annam bahu Kurvita, tad vratam" (Food has to be prepared in abundance, that is a vow) 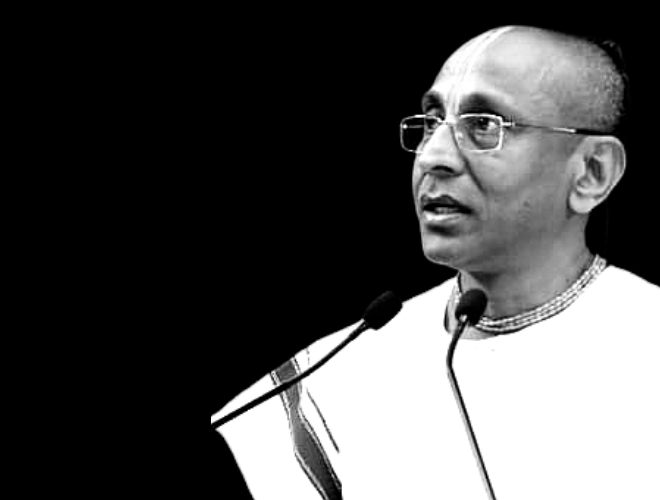 Food is a big part of ISKCON. Srila Prabhupada, the founder-acharya of ISKCON, was an excellent cook himself and he captured the hearts of his early western followers with his delicious preparations. He wanted ISKCON to be involved in food distribution on a big scale and that aspiration has given birth to Akshaya Patra Foundation. In this session Sri Chanchalapathi Prabhu will lead us through the fascinating story and philosophy of action behind Akshaya Patra.

Chanchalapathi Prabhu ji (C P Das) has been working in the field of spiritual education since 1984 and social development since 2000.

Although he had been passionate about science since his schools days, he became introduced to Indian spirituality as an undergraduate student in PSG College of Technology, Coimbatore. Impressed by the profound concepts of spirituality, he pursued the same even more vigorously while doing his master’s program in Electrical Communication engineering at Indian Institute of Science, Bangalore.

He joined ISKCON in 1984, became involved in Akshaya Patra in 2000 which has become the largest school meal program feeding over 1.8 million underprivileged children in 12 states and 2 Union Territories in 51 locations in 19,039 government & government aided schools in the country. He was able to combine his values of compassion from his spiritual learning with his education in technology and apply the same to create a social development organization like The Akshaya Patra Foundation.

He continues to research, teach and talk extensively on spirituality, social development and the intersection of science & spirituality.

This is the common link for all the 7-8 AM  (IST) sessions.  If you have already registered once for the morning session, you need not re-register.