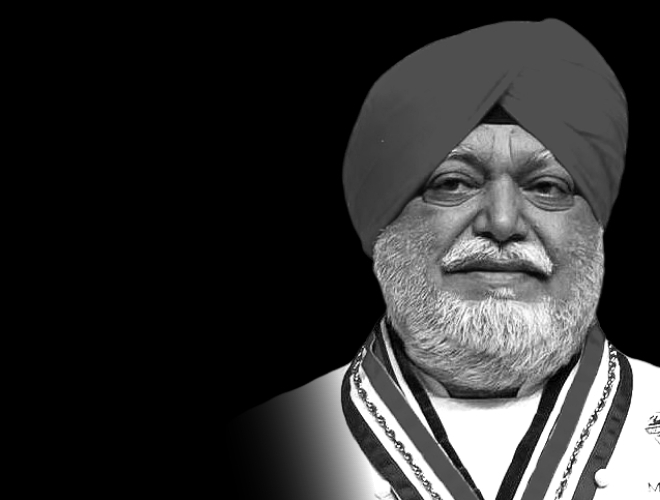 This session will look into food and its evolution over the years from being an auspicious part of our life to now being a highly commercialized commodity, and how this journey has impacted the human race.

Chef Manjit Gill is a culinary professional par excellence. Reputed for his constant innovation in the world of gastronomy, his is a name to reckon with in the national and global hospitality and culinary industry. As the former Corporate Chef & Culinary Consultant of ITC, his knowledge and experience comes from over four decades of work in pioneering world-class restaurants curating traditional Indian food and drawing on the nation’s culinary diversity – bringing unmatched fame to concept restaurants like Bukhara – the north-west frontier tandoori cuisine, Dum Pukht – a grand cuisine from Avadh, Dakshin – the specialized cuisine of the four southern states of India, Kabab & Kurry – the best of pan-Indian kebabs and curry dishes, and the most recent Royal Vega – ‘honestly’ vegetarian cuisine based on the philosophy, principles and guidelines of Indian gastronomy (Ayurveda) served in royal style.

Bukhara as well as Dum Pukht have been ranked among the ‘The World's 50 Best Restaurants’ by Restaurant Magazine, UK; while Conde Nast Traveller, USA, rated Bukhara as one of the world’s best restaurants in 2016.

From designing the menu to curating the carefully selected Indian fare for world leaders, Manjit Gill has had the privilege of serving former American Presidents Barack Obama, Bill Clinton, George Bush, and the French, Canadian, British and German premiers among many. Besides this, Chef Gill has passionately catered to the palettes of hundreds of global leaders at state banquets, held at ITC properties. In 1992, Chef Gill had the unforgettable opportunity of being invited to cook for Prince Charles and Lady Diana, at the Palace of the Maharaja of Jaipur.

Awarded Escoffier Medal in 2019 by the Worldchefs -World Associations of Chefs Societies. – This global award is given to a person have proven that they shown a commitment to the profile and high standards of the Culinary arts and hospitality.

This is the common link for all the 7.00 pm - 8.00 PM  (IST) sessions.  If you have already registered once for the noon session, you need not re-register