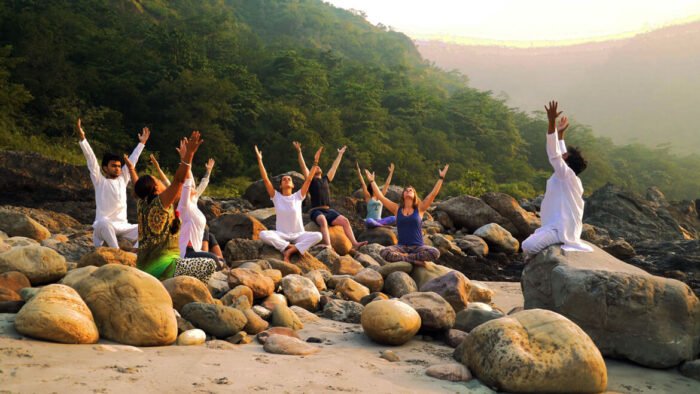 In this time of degeneration and decay, the Kaliyuga, we are witnessing a progressive expansion of ignorance which manifests itself under the variegated forms of erroneous knowledge (avidya).

The imbalance that generates disharmony expands like wildfire, not even sparing the sacred ground of Tradition, the sanctuary of Harmony (sattva).

It is therefore necessary, on the part of all sincere searchers (jijnasa) who have undertaken the path (sadhana) towards liberation-Enlightenment (moksa), to strengthen with determination (abhyasa), detachment (vairagya) and the attention capacity (vitarka) discriminating (vicara) between true knowledge (vidya) and false knowledge (avidya).

First of all in oneself, remaining firmly anchored to the crystalline sources of Tradition (sanatana dharma) and its sacred texts (sruti and smrti).

Yoga, in this purifying action (kriya), is and remains a powerful tool, a method of great efficacy. The architecture of Yoga rests on solid foundations: Yama and Niyama clearly establish the Duties and Observances to be put into practice in every moment of existence.

Yoga is transformation, transmutation, purification; otherwise is not Yoga.

Its principles are a-temporal and a-spatial. They have already been established and consolidated. It is up to us only to make them our own, make them alive, implement them, becoming a visible manifestation of them.

In compliance with the rules of initiatory Transmission, through the uninterrupted Master-disciple chain (guru sisya parampara). Particular vigilance, along the whole path (sadhana), must be exercised towards the manifestations of erroneous knowledge (avidya) that in the Kali-yuga spread and take hold on weak and weakened spirits, victims of the lowest impulses and slaves of the profane desires of the ego.

These manifestations of erroneous knowledge, even if well disguised under fascinating and attractive envelopes, are easily identifiable thanks to their common characteristic: the dominance of the ego.

Yoga is Yoga. It does not need any further specification. There is nothing to add and nothing to take away: it simply needs to be experienced and realized.

The fashion of always inventing new 'yoga' is systematically associated with profit: Yoga is debased and smuggled as an 'original' commodity, preferably associated with an alleged 'intellectual property' covered by copyright. Any sincere seeker can, at best, aspire to the role of being a good servant of Yoga; always keeping the temperamental horses of the ego well in check.

Any sincere researcher who follows the route of Wisdom (jñana - vidya) will avoid showing off and passing off the truths that are part of the traditional heritage (sruti e smrti) as his original thoughts. At the most, limited to the part of the path already completed positively, he will be able to try to understand and share his experience of transformation, the obstacles he has had to face and the tools of Tradition that he has used to overcome them.

Making the distinction between Wisdom (vidya) and wrong knowledge (avidya) is a welcome Duty. An action of non-action that helps to restore balance and Harmony (dharma). Remember every moment that Yoga has only one owner: Tradition (sanatana dharma). Which must be respected and respected.

Therefore, rejecting as non-yoga everything that is proposed in the form of a commodity linked to profit and well rooted in the widespread commodification of existence in Kali Yuga.

Yoga is Wisdom (jñana) of correct knowledge (vidya), any claim of intellectual property and copyright on Yoga (under the pretext of being 'original' only because associated with more or less imaginative adjectives) is no longer yoga, it is false-knowledge (avidya); false knowledge that is then spread by packaging tempting products that promise unlikely realizations in a short time, without particular commitment and above all by evading the essential preconditions to be able to undertake the journey: duties and observances (yama and niyama). Evasion of Yama and Niyama, or even worse the theory of their non-necessity, is a factor closely linked to the time of Kali-Yuga, where the Virtues are systematically derided and neglected as an obstacle to the free expression of the lowest ego drives, new idols of a society based on commodification, consumption, the narrow superficiality of the lowest instincts.

For this reason, at this time, it is particularly important to reaffirm the fundamental importance of Yama and Niyama. Duties and Observances which, if made vital and used as tools of individual transmutation, represent the most effective antidote to avoid falling into the sticky swamps of the ego and its impulses (desire for profit, desire for power, desire for fame). Without ever forgetting that the path is long, full of obstacles, and it is impossible without carrying out a transmutation (parinama) of one's being. In the luminous wake of the one Tradition, under the wise and loving guidance of a Master (guru) who has already completed this journey successfully.

Without ever forgetting that the sacred language of Yoga is not English or any other language ....... it is only and exclusively Sanskrit (samskrtam).