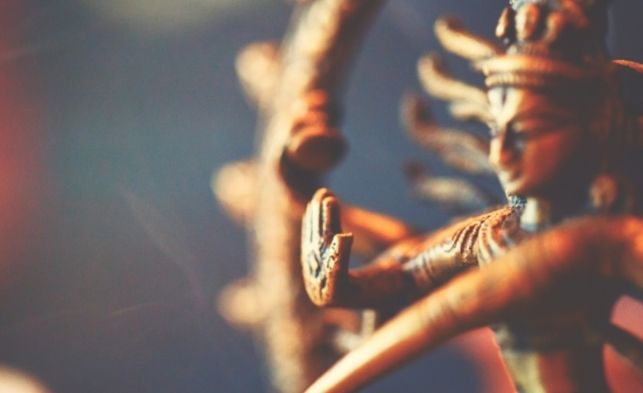 An overview of the contents of Gheraṇḍa-saṃhitā, a very important text in the field of Haṭha-yoga, is attempted in this article.

It is to be noted that, as there are many editions of Gheraṇḍa-saṃhitā, this overview is based on the following edition– The Gheraṇḍa-saṃhitā, with Translation by Sris Chandra Vasu, Tattva Vivechaka Press, Bombay, 1895 – which is one the earliest publications of the text. It is interesting and informative to read the introduction (pp.XXi -XXiX ) and appendix (pp. Xi- XiX) section of this edition  where the translator’s experiences & observations on the efficacy of Yogic practices  with quotes from medical and such other records (of his period) are presented.

The plan of the work.

On being asked about Ghaṭa-stha-yoga (yoga based on Ghaṭa – the body) and also the path to Tattva-jñāna (true knowledge) (Chapter 1 Verse 2) by Caṇḍa-kāpāli, a student,  Yogeśvara Gheraṇḍa  states that there are seven practices (Sapta-sādhana) (Chapter 1 Verse 9-11) that are to be done which would lead to Tattva-jñāna. Each of the seven practices shall bestow seven outcomes towards the ultimate goal (realization of the Ātman). Based on these seven practices this text is laid out in seven chapters.  The chapters of the Gheraṇḍa-saṃhitā are called as Upadeśas (advice). The major content of each of the Upadeśas and the number of verses in each chapter and such other details are given in the table below –

Thus it can be seen that there are 360 verses in this text as per the edition consulted.  The following is a summary of the flow of contents in each of the chapter.

The Six acts of cleansing the body mentioned in the text are Dhauti, Vasti, Neti, Laulikī, Trāṭaka, and Kapālabhāti (Verses 12 - 60)

Though there is no definition of the word Dhauti as such in this text, still the purpose of the practice of Dhauti is stated to cleanse the body (ghaṭasya nirmalārthāya – verse 14). All these practices are meant to cleanse the various parts of the body to rid the residual impurities in the body. Use of water, inhalation of air and moving the parts of the body helps in the cleansing process. Other herbal preparations are also prescribed in the practices involved in cleansing the teeth etc. Ears, teeth, abdomen, the excretory organs are all cleansed in the various kinds of Dhautis that are prescribed in the text. This is short gives a general idea about the practice. The text may be studied in original to know about the details of the practices. The four divisions of Dhauti are given below (verse 13) -

The subdivisions of each of the above practices are -

The method of practice and its benefits are described (verses 42-54 ) in this chapter after the description of the three previous types of Dhautis with their subdivisions. It is important to be noted that - unlike Haṭha-yoga-pradīpikā that presents the six karmas as a preparation of Prāṇāyāma – in this text - right at the beginning – Ṣaṭ-karma are prescribed.

II. Second Karma - Vasti
After Dhauti –Vasti which is of two types Jala-vasti and śuṣkavasti are elaborated in the first chapter (verses 45-49). This practice generally refers to cleansing the anus region by contracting and expanding it. This is done either standing in navel deep water or even on ground as indicated by the two-fold division. The benefits of the practice such as overcoming Prameha (diabetes) etc. are also mentioned in the text.

III. Third Karma - Neti
As per this text, this practice involves the insertion of a thread in the nasal passage and drawing it through the mouth (verse 50). The benefits of the practice such as overcoming Kapha related problems etc. are also mentioned. (verse 51)

IV. Fourth Karma Laulikī
This practice involves the movement of the abdomen in a clockwise manner from one side to the other. Overcoming various illnesses and also increase of Jaṭharāgni (metabolism) is described as the benefit of the practice (verse 52). This is comparable to the Nauli of the Haṭha-yoga-pradīpikā.

In this chapter, at the beginning it has been stated that – as many are the kinds of species, so many are the Āsanas. It is then stated that Lord Śiva has taught 84 lakhs of Āsanas. Then a collection of 1600 Āsanas was done. Even from among them - 32 Āsanas are beneficial/auspicious in the human world. (verses 1-2)

Then a list of 32 Āsanas are given in this text (verses 3-6.) In the order of enumeration - all the 32 Āsanas are defined and their benefits are stated. The list of the Āsanas and the reference to the verses in which they are discussed are as follows –

The chapter begins with enlisting the 25 Mudrā-s in the first three verses (1-3). Mudrā-s are - stated to bestow special powers and a state of comfort for the Yogins (verses 4-5). Following this - in the order of their enumeration the descriptions and the benefits of each of the Mudrā-s are given. The list of Mudrā-s with reference to the verses in which they are discussed is as follows –

As evident from the above  - Mudrā-s 16-18 in the list above are based on the five elements and form a set of practices. After the exposition of all the Mudrā-s once again the benefits of the practices are stated. It is mentioned that the practice of these helps overcoming aging and death (verse 94). It is also advised that care is to be taken by the teacher to impart this knowledge only to a deserving student and not the unfit (verses 95,96). In the rest of the verses of the chapter till the end (verses 97-100) – the therapeutic benefits of the practice of Mudrā-s are enlisted.

This is a very short chapter with just seven verses. It is modeled on the following verse from the sixth chapter of the Bhagavad-gītā –

From whatever cause the restless and unsteady mind wanders away, from that let him restrain it and bring it under the control of the Self alone. (Swami Śivananda’s translation[1])

After quoting the above verse– Gheraṇḍa-saṃhitā continues with the teachings on Pratyāhāra – while retaining a portion - ātmanyeva vaśaṃ nayet.. from the verse quoted, in all subsequent verses of this section. It is stated herein that – the mind that is distracted by various sights (verse 3), fear or favour (verse 4), hot or cold (verse 5), fragrance or bad odor (verse 6) and various kinds of taste (verse 7) should be (noticed and mindfully) brought back to oneself. It is to be noted that though in Haṭha-yoga-pradīpikā, there is no separate section for Pratyāhāra - in another Haṭha text - Yoga-yājñavalkya-saṃhitā (Chapter seven[2]) practical techniques for Pratyāhāra are discussed.

This chapter on Prāṇāyāma is divided into five parts (verse 2). The five parts and the span of verses of each of the division in this chapter is as follows –

As it can be noted here, Kevalī is a practice that is not found in Haṭha-yoga-pradīpikā. Further, the practices of Sītkārī and Plāvinī are not to be found in Gheraṇḍa-saṃhitā. The substantial discussions in this text on proper place and time for practice of Prāṇāyāma, Nāḍīśuddhi and Mitāhāra are insightful.

This is also a comparatively smaller chapter with 23 verses.
Three types of Dhyāna practices are detailed here. They are –

1. Sthūladhyāna (verses 2-14) - As the very name suggests - in this practice a divinity of a the meditators preference with manifest qualities (Sthūla) - is to be meditated upon in the heart.
2. Jyotirdhyāna (verses 15-18) – It is the meditation upon the ,luminous Kundalini Jivātman, Agni, Brahman in various places in the body like the Muladhara region, navel, place in between the eyebrows etc.
3. Sūkṣmadhyāna (verses 19- 23) - This is a meditation that is done when the Kuṇḍalinī is active but subtle & imperceptible. It is indicated herein that by Śāmbhavī Mudrā (such Kuṇḍalinī) meditatiom can be done. This seems to be a practice accessible to advanced practitioners.

The third Dhyāna is said to be more powerful and beneficial than the earlier two types. In Haṭha-yoga-pradīpikā though there is no separate section for Dhyāna, its fourth chapter on Nādānusandhāna is indeed an exposition on Dhyāna and Samādhi.

A few verses introducing Samādhi yoga is stated at the outset in this chapter(verses 1-6). It is stated that Samādhi is attained by the blessing of the Guru, relentless practice. The object of focus for Samādhi is mentioned as the Brahman (pure consciousness) that is not different from oneself. The list of six approaches to Samādhi is also given in these initial set of verses. The subsequent verses of the chapter elaborate the six types of Samādhi in the order of enumeration. The types of Samādhis and the span of verses within which they are discussed in this chapter are as follows -

1. Raja-yoga-samādhi (Verse 16) – It is advised herein that - by making the mind attain stupor (Mūrrchā) one should merge the Ātman with the supreme consciousness.

The final set of verses (verses 17-24) of this chapter, which also marks the end of the text, glorifies the state of Samādhi. The text advises the practitioner to see the entire creation with all the beings in it as Viṣṇu & Brahman (the supreme being). The need to realize the Ātman as separate from the body is also emphasized. Finally, it is stated that - this is a secret knowledge taught by Lord Śiva and hence has to be protected secretly (to be given only to the deserving). Also the practice of the principles herein would lead to liberation after which there would be no rebirth.

Conclusion
It could be observed that this text is a veritable mine of practical inputs on various techniques of Yoga that are therapeutically beneficial. The elaborate discussions on - Kriyās (with their various subdivisions), Āsanas and Mudrā-s can be considered as very unique contributions of the text. Even though some grammatical inconsistencies, textual corruption and lack of succinctness are noted in the verses (based on the edition consulted) still due to the richness of techniques and Yogic inputs, Gheraṇḍa-saṃhitā becomes one of the most important texts in Haṭha-yoga to be studied with great attention by the practitioners of Yoga.