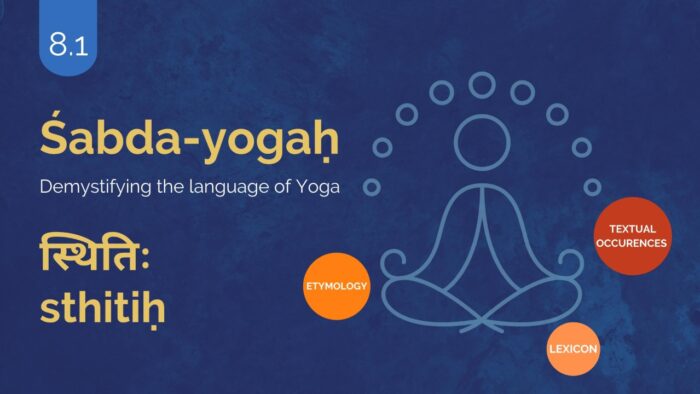 The terms that will be analyzed in this Unit are -

Though, terms such as Tatra, dīrghakāla, nairantarya, āsevitaḥ are part of the Sūtras, still they are not take up as they are simple terms used in their general sense and also not prevalently used in Yoga context.

There are two entries in Amarakośa. They are as follows -

āsyā, āsanā, sthiti are the words that mean - being seated.

Though lexicon gives two interesting meanings limit and being seated, these meanings are not seen to be applicable in the context of Yogasūtra 1.13.

There are three occurrences of the term Sthiti in this text. They are as follows -

tatra sthitau yatnā'bhyāsaḥ .. 1.13 - This Sūtra defines abhyāsa, one among the twin tools to attain Citta-vritti-nirodha (cessation/restraint of activities of the mind). The effort to attain sthiti is defined as abhyāsa by Sage Patañjali.

The following table gives the details about the various views of traditional commentators on this very crucial term.

Source: Mahadevan J. Sthiti and Yatna in the abhyāsa of Yoga: A textual study based on 15 Saṃskṛta commentaries of Yogasūtra. Yoga Mimamsa 2021;53:122-8

viṣayavatī vā pravṛttirutpannā manasaḥ sthitinibandhanī .. 1.35 .. – This Sūtra describes a Yogic method called viṣayavatī pravṛtti by which the sthiti – or stability of the mind shall be ensured in the object of focus. Here the word Sthiti refers to non-distracted, stable, steady state of mind. This is agreed by most commentators.

prakāśakriyāsthitiśīlaṃ bhūtendriyātmakaṃ bhogāpavargārthaṃ dṛśyam .. 2.18 .. – This Sūtra describes the dṛśya – the object seen by the consciousness. This kind of seen object exhibits three qualities – prakāśa – light/knowledge, kriyā - action and sthiti-absence of movement/inertia. The commentators note that these three attributes are expression of the three Guṇas namely Sattva, Rajas and Tamas.

There are five occurrences of the term sthiti and its close derivatives in Bhagavadgītā.

eṣā brāhmī sthitiḥ pārtha naināṃ prāpya vimuhyati .
sthitvāsyāmantakāle'pi brahmanirvāṇamṛcchati .. 2.72 ..  – This is the last verse in the second chapter. The word sthiti – is used to denote state and it has an adjective – brāhmī – associate to Brahman.

yo'yaṃ yogastvayā proktaḥ sāmyena madhusūdana .
etasyāhaṃ na paśyāmi cañcalatvāt sthitiṃ sthirām .. 6.33 .. – These are the words of Arjuna in the sixth chapter. Here he doubts that whether the teachings of Kṛṣṇa on meditation can be followed at all. He feels that the Yoga taught by Kṛṣṇa is difficult to follow because – he says “as I do not see the stable state (sthitiṃ sthirām) because it is fickle”.

Knowledge – Jñāna - refers to the knowledge about Ātman and associated principles attained from the śāstratas and the Ācārya.  Yoga refers to making those principles self-evident by single pointed focus. Vyavasthiti – refers to being committed and dedicated to such cause of Jñāna and Yoga. It very interesting to note that by addition of the prefixes vi and ava – the meaning expression sthiti – becomes being dedicated.

yajñe tapasi dāne ca sthitiḥ saditi cocyate .
karma caiva tadarthīyaṃ sadityevābhidhīyate .. 17. 27 .. – Here the word Sthiti indicates being rooted. Being root in the practice of Yajña, tapas and dāna are term as Sat – noble. Though Ācārya Śaṅkara Bhagavatpāda does not comment upon the word Sthiti here,  this meaning emerges contextually.

There is just one occurrence of sthiti in this text.  It is as follows -

jñānaṃ muktiḥ sthitiḥ siddhiḥ guruvākyena labhyate .. 4.8 .. - This verse from the fourth chapter and it states about the greatness of Rājayoga. Jñāna, mukti and sthiti which are all part of Rājayoga are attained by the words of the Guru.

In this context the word sthiti has been explained by the Jyotsnā commentary as - स्थितिः निर्विकारस्वरूपावस्थितिरूपा-  sthitiḥ nirvikārasvarūpāvasthitirūpā – the unchanging establishment (of the mind) in the true nature of consciousness.

The etymological meaning conveys absence of movement or change. In the Yogic context this word assumes various connotations

1) Sthiti  - depending upon the context of usage may point to - non flickering, non-fluctuating nature of the mind which can either be single pointed focus or establishment in the true nature of the consciousness. Especially the word sthiti with the adjective Brahmī, in the Bhagavadgītā, indicates being established in the nature of Brahman itself. Haṭhayogapradīpikā also agrees with the meaning of unchanging establishment of the mind in the form of the consciousness.

2) sthiti – lack of movement in the senses and the elements –points to expression of Tamas in them.

3) Sthiti, contextually, also points to be meaning being rooted (in practice of Yajña, Dāna & Tapas).