Sanskrit is the Medium Through Which India has Given Expression to Her Soul: Dr Sampadananda Mishra 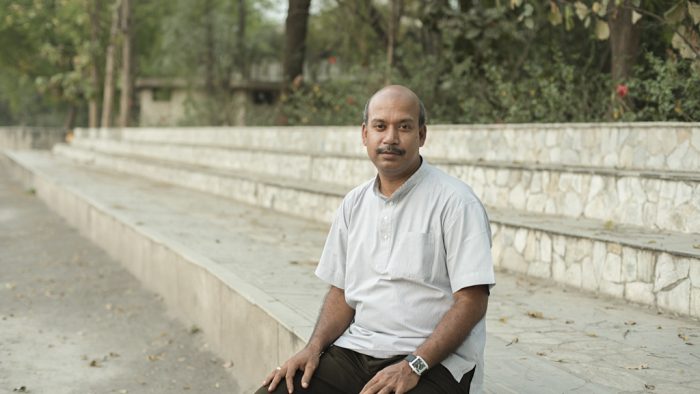 Sanskrit scholar Dr Sampadananda Mishra is the director of Sri Aurobindo Foundation for Indian Culture. Through the Vande Mataram Library Trust, an open-source and volunteer-driven project, he plans to generate verified, authentic English translations of almost all important scriptures available in Sanskrit. This pioneering project would also lay the foundation stone of original Sanskrit works that would enhance the appreciation and cultivation of the Vedic knowledge.

In this interview he speaks about his links with Sri Aurobindo and his work in Sanskrit.

How is Sri Aurobindo's vision of Integral Yoga important more than ever before?

Sri Aurobido’s Integral Yoga or Purnayoga is not an amalgamation of many Yogas but a synthesis of Yoga. In Sri Aurobindo’s Integral Yoga one finds basic truths of each of the major systems of yoga and its essential element along with the new dimension of evolution that he has added. Here the emphasis is on the transformation of every aspect of the human being and nature than the personal liberation. The emphasis here is the whole of human life on the earth. No aspect of life is rejected here or neglected. One has to grow by being aware of one’s own limited consciousness and keep perfecting oneself for the expansion of consciousness to take place. Aspiration for rising higher and higher, rejection of all that creates hindrances on the path of progress, and an unflinching faith in and surrender to the Divine Grace, are the three essential elements of this Yoga which make it more practical forever.

How has his vision inspired you?

I have been a student of Sanskrit and the Shastras right from my childhood. But I could rediscover myself and could find my understanding deepening and widening after coming in contact with the teachings of Sri Aurobindo and the Mother. I was more inspired by the practicality of Sri Aurobindo’s grand vision of transformation and his interpretation of words of the sacred texts by going to the roots, and the new science of language that he has given. So, understanding the vision of the seers and sages as found in the Vedas and Upanishads became more clear and practicing the Truth revealed in these sacred texts became feasible. In essence the intensity of Sri Aurobindo’s vision and the idea of transformation presented by him inspired me immensely.

What is the role of Sanskritam in understanding our traditional arts and culture?

Sanskrit or samskritam has been the medium through which India has given expression to its soul. All that is a part of the culture of our land has found its highest expression through this language. In order to understand the deeper essence and truths of the arts and culture of this land knowledge of Sanskrit is essential. Sanskrit in a deeper sense is not a language like other languages, it’s the whole of India’s culture by itself. A conscious use of this language and a deeper association with it reveals how it contains within it the essential truths of the Indian culture.

How does one transcend from the practice of asanas to elevation of Consciousness. What is the extra step which many Yoga practioners are missing?

As per the realizations of the seers and sages and the spiritual masters the creation is not something static, but a constant unfolding of the Supreme Reality which is the source of everything. The purpose of life here must therefore be to ascend to higher realms of consciousness and experience the new. All kinds of practice when done with awareness and with the aim of making oneself free from the limited consciousness are good. But one should not get stuck with any one single practice and claim that to be the only way. What was adequate for its growing consciousness in the past may be inadequate today. So one has to make necessary efforts to rise higher and higher, as the Veda says yat sanoh sanum a aruhat….

What aspects of Sanskritam as a language help in spiritual elevation?

The purity of the vibration of its sounds, the Mantric force behind the language are very elevating. It immediately connects with something higher and creates a sense of purity, peace, calmness, and raises the being to a state of unity and oneness. This is from the language point of view. In addition to this, the thought contents expressed through this language are capable of taking to greater heights, widening and heightening the consciousness of the one who uses it consciously. The realizations of the seers and sages as recorded in the Vedas, Upanishads and other sacred texts in Sanskrit, have immense power to connect with the realized truth when approached rightly.

The very nature of Sanskrit shows that it has been designed from its very inception as a Mantric language. This is a language that has been almost flawless in its make. Anyone who comes in contact with it feels a greater force behind its sounds. The musicality and the rhythmic beauty of this language, its power of expression, the purity and vibration of its sounds, the eternal relationship between its sounds and senses, all these have made Sanskrit a wonderful language which, like a Mantra. It has the power to uplift and illumine and enlighten and transform. In ancient time the sages and seers of India used it as a tool for discovering the true nature of themselves and all that they saw in and around them. Most importantly, Sanskrit always reminds us of the very purpose of life and provides ample materials to fulfill that purpose.

What is the importance of learning Yoga from a traditional guru in one's life?

A Guru is he who has the power to take the burden of all those who approach him. He knows what is needed for a seeker. He knows the way a seeker can be raised to the highest state. So if one is fortunate enough to find such a Guru for taking guidance from him for his growth, it helps immensely. The ultimate Guru is the Divine within oneself.

What is the demand for Sanskrit mainly today among non-Indians?

Non-Indians have deep interest in Sanskrit for various purposes. Among those who take interest few are genuinely interested as they are inspired by the Sanatana Dharma and because of their love for India. There are plenty who have interest not because they love Sanskrit or India. Their whole purpose of studying this language to distort and show the whole world that here is a language that is divisive, oppressive and useless. We should not simply be carried away by the fact that there is demand for Sanskrit by the non-Indians.

Are there studies being done on the psychological impact of learning Sanskrit on the mind?

Yes there are a few studies on the psychological impact of learning Sanskrit and chanting of the mantras on the mind. But real impact of Sanskrit is far greater than what results from these studies. Any such scientific study is always found to be very limited in its scope. One should therefore get inspired by the beauty, charm, purity and force of Sanskrit than looking for some scientific study for one’s inspiration.

What are the texts that you recommend that practioners of Yoga read in Sanskrit for an enquiry into Yoga?

It depends which system of yoga one follows. Each system of Yoga has its own texts and an in depth study of those texts is necessary for a deeper understanding of that system. I would personally suggest for a deeper acquaintance with the vision of the seers and sages of the Vedas and Upanishads for a wider understanding of Yoga as a whole. One can begin with a proper study of the Gita for the understanding what Yoga is and what one needs to practice for one’s inner growth. This indeed is the text that has been given by the Yogeswara himself and forms the foundation for the later systems of yoga. A text that is simple in its presentation and extremely practical. 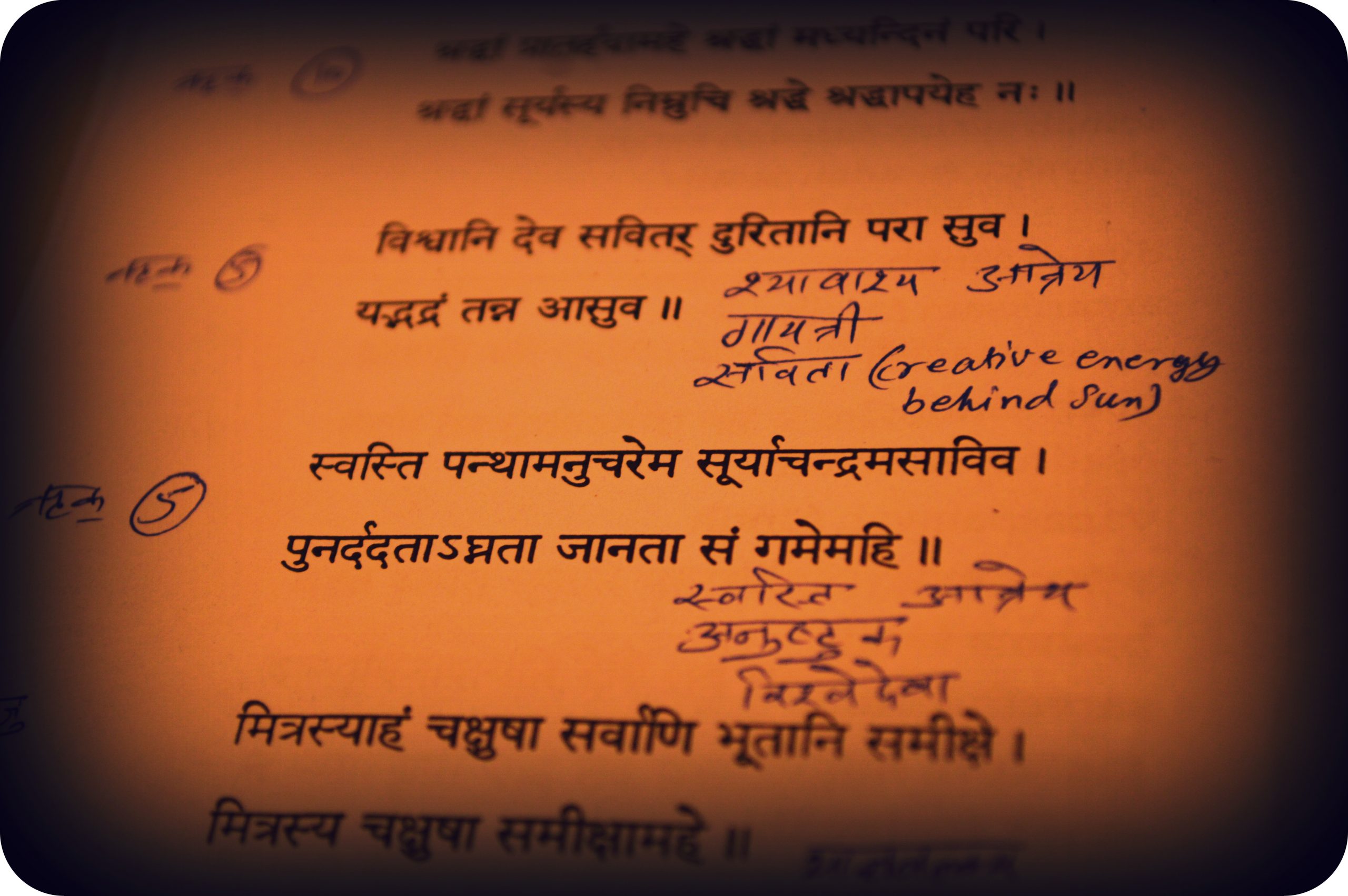 Please could you share anecdotes from Sri Aurobindo's life related to Yoga which have inspired you?

The one that had inspired me in the beginning was when someone once asked Sri Aurobindo – ‘Are you God?’ His reply was – ‘Yes I am god, you are also god. You must know it and behave accordingly’.

This has been the essential truth of Sanatana Dharma. It’s message is that everyone and everything is Divine. And the Yoga in its deeper sense means to be founded in the state of oneness and sameness where there is no this or that, mine and yours, but all is Divine, that One, indivisible. So, with all sincerity and intensity, to hold it in one’s consciousness that all is Divine is the key to the attainment of this state of ekatva and samatva.

The most important story that has left an indelible impact on my mind and heart is the story of his imprisonment. It is in the prison that he had the vision of sarvam vasudevamayam jagat. It is here that Sri Krishna placed the Gita in his hand. In Sri Aurobindo’s own words from his Uttarapara speech:

“…Then He placed the Gita in my hands. His strength entered into me and I was able to do the sadhana of the Gita. I was not only to understand intellectually but to realise what Sri Krishna demanded of Arjuna and what He demands of those who aspire to do His work, to be free from repulsion and desire, to do work for Him without the demand for fruit, to renounce self-will and become a passive and faithful instrument in His hands, to have an equal heart for high and low, friend and opponent, success and failure, yet not to do His work negligently.”

It is here again that he says: “Other religions are preponderatingly religions of faith and profession, but the Sanatana Dharma is life itself; it is a thing that has not so much to be believed as lived.”

I would like to conclude with the following passage from Sri Aurobindo which further inspires me:

“I seek not science, not religion, not Theosophy, but Veda—the truth about Brahman, not only about His essentiality, but about His manifestation, not a lamp on the way to the forest, but a light and a guide to joy and action in the world, the truth which is beyond opinion, the knowledge which all thought strives after — yasmin vijďate sarvam vijďatam. I believe that Veda to be the foundation of the Sanatan Dharma; I believe it to be the concealed divinity within Hinduism,—but a veil has to be drawn aside, a curtain has to be lifted. I believe it to be knowable and discoverable. I believe the future of India and the world to depend on its discovery and on its application, not to the renunciation of life, but to life in the world and among men.” – Sri Aurobindo.