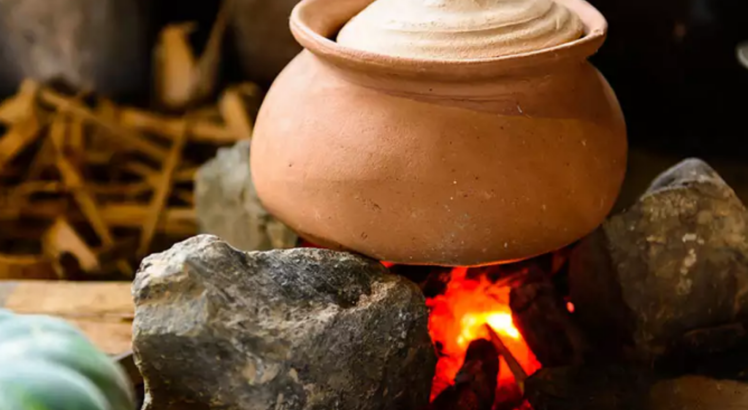 From Earth to Hearth  will look at the journey of food. Every culture has its own culinary traditions and cuisine, and India's cuisine is so varied it changes every few hundred kilometres. Indian cooking traditions have been influenced largely by Ayurveda, though not exclusively, and there are inscriptions and texts that show a well documented, well-thought out system which looked as food as being medicinal. These texts outline the entire process right from the growing of certain crops, the emphasis on the local and seasonal, the use of certain utensils as well as the nature and mood of the person cooking food.

Ancient Indian traditions believe: You are what you eat, the food you eat can keep you healthy or can be a poison to the body. Ahaara or food is considered Para-brahma in India.'

Derived from Bhojanakutahalam, the shloka says Food is Brahma, the essence is Vishnu and the consumer is Shiva. In other words, every being is born out of food (Brahma), sustenance is through food (Vishnu) and ultimately is dissolved into food (Shiva). This shloka is to be chanted before the commencement of a meal. In the taittiriya Upanishad too, food is said to be Parabrahma. For Swasthya or good health, food was very important.

The ancient texts of India such as Bhojanakutahalam, Kshema Kutuhalam and Nalapaka Darpana give an account of traditional food science and technology as developed by our ancestors. The present generation, more commonly known as junk-food lovers prefer taste over the properties of food and this food can have a serious impact on their physical and mental well-being. Modern science has played a role in elucidating the nutritional aspect of the food but has left out the medicinal aspect.

Ayurveda does not tell what to and what not to eat, but tells us how to eat. The concept of dietetics and culinary art is described very clearly in Ayurveda. Cooking is an art form that spreads life, which is why it is often said that while one cooks, the mind must be unagitated and that tranquillity is absorbed into the food. When other people consume this food, that tranquillity in the food is transferred. Also when it is cooked this way, the food turns out super aromatic and delicious.

The Ksemasarma describes the kitchens of those days and why it must be located in the south-east corner of the house with the stove running from east to west. Agni devata or the fire god resides in the south east corner. The utensils that one uses while cooking also plays a role in exudating health and taste to the food. Food that is cooked in clay, iron, bronze, copper, gold and silver is said to confer benefits at the physical, mental and intellectual levels. When the food is digested, the Sthoola and Sookshma nourishes the body and the soft tissues (physical) and the Parama-sookshma nourishes the Prana and the Manas (mental and intellectual).

The storage of boiled rice, ghee, vegetables, milk and other dairy products in the right containers is very important to retain the nutritional status of the food. Certain materials confer medicinal properties to the food that when consumed is beneficial in curing various maladies.

Clay is considered a poor conductor of heat yet is used extensively in the manufacture of cookware. This is because it conducts heat slowly and this way the food is cooked uniformly. Chulhas which are traditionally made from clay and brick while cooked on an open fire. The taste of the food is not only enhanced but is given a more rustic aroma. Clay water pots keep the water cool and this cool water never causes sore throat or a cold. This water is filled with minerals and is known to improve metabolism. Other than water, milk-dishes and buttermilk has to be stored in earthen containers. One might have observed rasgullas stored and sold in these earthen containers. Curd made in these pots sets well and has a unique taste. Earthen vessels are to be used only as containers or cooking utensils. Food must not be served in them as they are known to bring misfortune.

Before cast iron came into being, puranpolis, the Maharashtrian delicacy, was made in earthen pots with holes in them, known as Khapar. Even now, in Khandeshi cuisine, this utensil is used extensively to make puranpolis.

Bell metal used for cooking helps to improve one's intellect, appetite and clears the blood and the food cooked in it remains pure. Bell metal containers should be used to store boiled rice and items that are made out of flour.

Food cooked in iron vessels helps to increase the haemoglobin content in the body. It also helps to cure infections of the eye and piles. Ghee, cooked leafy vegetables and edible plant products have to be placed in iron vessels. Alternatively, they can be stored in wooden or stony vessels. Also, food served in iron and glass utensils confers success to the consumer. It also treats inflammation, imparts strength and is known to be an excellent treatment for Kamalaa.

Crystal is a widely used material used in containers. Glass, crystal containers must be used to store raita, Khadava powder and Sattaka. Crystal is pure and cooling.

Golden and silver utensils alleviate doshas and help to improve sight. They bring in enthusiasm and improve intellect.

Ayurveda gives an account of utensils made out of leaves as well. Leaf vessels stimulate the Agni and act as a detoxifier. The plantain leaf is an aphrodisiac. It improves the taste and treats any toxicity in the body. Food served in a pineapple leaf alleviates kapha and vata and promotes health. Food that is served in leaves that secretes milky sap helps to overcome thirst and alleviates any burning sensation. Ketaki leaves used to serve food are beneficial to the eyes. Food that is stored in appropriate containers will remove diseases, brings happiness and pleases the heart. When this is not obeyed, the doshas are affected and disease is caused. Nala in NalaPaka Darpana describes the processing of food. He speaks of how pulses must be cooked with turmeric and asofeotida. He describes various pulses and says pulses are alleviators of Pitta and promoters of heath. He had classified food items into 5 different types based on their texture- bhakshya (semi hard- laddu), bhojya (soft food- rice, pulses), lehya (food that can be licked- sauces), cosva (food that can be sucked on- sugarcane), and peya (drinkable items- fruit juices) and these 5 types of food will possess either of the six tastes as described by Ayurveda- madhura, lavana, amla, katu, tikta and kashaya. Those who relish on these food items that are prepared with the utmost care will be rewarded with positive health. These preparations taken in this order will alleviate one from Vata and pitta disorders.

The qualities of a cook also affects the final outcome of a preparation. A cook who is appointed must be habituated to that place. He must be intellectual and must possess moral and ethical values. He must be aware of metallic utensils, conversant with the places and seasons. He must be very attentive and must possess the knowledge of every type of cooking.

Finally, it is important to eat right- which means eating the right food at the right time. When an Ayurveda practitioner prescribes medicines, they will also prescribe a diet- how, what and when to consume the diet. An interval of three hours between each meal is necessary and one must have food before a 6-hour timespan. Drinking water before meals is not advisable as it depletes the digestive fire. Eating short meals every two hours is not right and this is one of the root causes for obesity and other diseases. Ayurveda lays down clear directions for all to keep the Agni strong thus leading a healthy lifestyle.