The Magic of the Mat 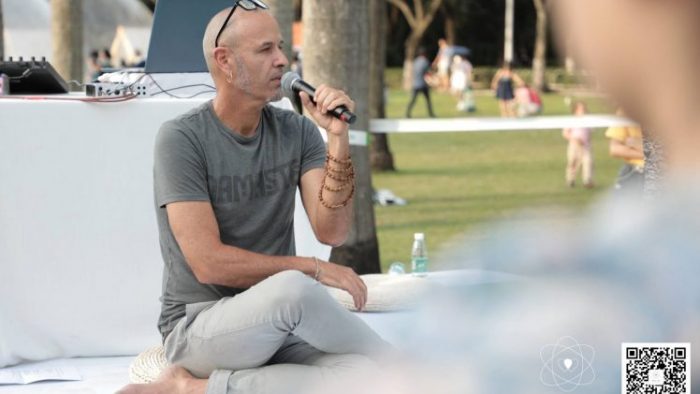 Many a purist has griped that there is only one way of doing Yoga. There are others who believe that the more people who do Yoga, in many different ways, the greater will be the role played by India in the world, closing the gap between tradition and modernity.

Yotam Agam is a man of the desert, and he has got people to do 108 Surya Namaskars at the Arava Desert (which means desolate and dry area in Hebrew), South of the Dead Sea Basin, which forms part of the border between Israel and Jordan.

The practitioners, stretch, take deep breaths and salute the Mighty Sun, with the mountains as a backdrop, painting a scene which is simultaneously surreal and yet true to the roots of Yoga.

In 2004, 35-year-old Yotam came to India to work in Chennai, and immediately sought a Yoga guru. He started a basic Hata Yoga practice with a local guru. The practice was in his guru’s room and went on for a year, after which he set out on his own.

To Yotam, Ashtanga Yoga is very accessible to everyone. “It is a practice of exploration designed for house holders, on how to find peace within yourself using different techniques. While it has many layers that take time to reveal, the physical layer is a gateway to the practice and its mysteries.”

The physicality of Yoga is the entry point to further growth. It is difficult to move beyond, without first having committed to a daily practice, which is the key to sustaining oneself in Yoga. Describing his daily practice, Yotam says, “I start my day with either one hour Pranayama followed by short asana practice, or a long asana practice mixed with some readings. After which my day starts, and I try to remind myself the little things I learn on the mat throughout the day.” A feeling which resonates with everyone who holds the mat dear. To use a modern metaphor, the rolling of the mat can have a placebo effect on people’s well-being.

Yotam says the spirituality of the practice lies in the quietude it brings. “Yoga is a practice to still the movements of the mind. Yoga is very much a spiritual practice by the simple rule, that if you show up daily to your practice you will cultivate a spiritual path of exploration. Once you let it grow on you, you realise the beauty and the strength of breath, seat and meditation, the asana become a gateway to all of this.”

There is no greater way to access a certain oneness of spirit than through Nadam. Yotam says, “Sound and Music have a huge influence on the mind and body. Listening makes us be present in the moment and touch our emotions. By simple listening with consciousness we experience deeper layers of ourselves. Music is a great practice and tool for another dimension, or another way to find Drishti (focus) in your practice.”

To Yotam, all music can be an inspiration on the mat. It could be the sound of birds on the roof top of the yoga shaala in R A Puram in Chennai, or it could be “some sort of drone that never ends and carries you through the practice, or it can be a simple repetitive rhythm that encourages your brain to slow down. It can also be a mantra or anything that helps you get your mind focus on the practice.” But, he adds wisely, “Strangly enough, most of the time I prefer silent practice with my Ujjai breath sound.”

Yotam composes live music even as his class is in progress. At that point the music becomes a yoke. “I want to be able to act as a thread for the students, to help them get centred. But I have to remember to be transparent and humble to the energy in the room, the teacher and the students. The music in the class does have a very strong effect on the energy flow and in many cases helps everyone to connect deeper to the moment.”

The Nomadic desert music of his homeland is simple and resonates with some folk music forms in India. “That said, classical Indian music both Carnatic and Hindustani is a world of its own, rich in colours and depth which does not really exist anywhere else. Its spiritual layers are amazing and a lifetime to learn,” he adds.

Link to his Soundcloud: