Extract from the book - The Song of God (Introduction page)

The Bhagavad Gita (Song of God) has captured the imagination of thinking men and women all over the world. It has been translated into many languages and has among its devotees people belonging to many religions and nationalities. The uniqueness of the gospel of the Bhagavad Gita lies in the fact that its follower need not belong to a particular formal religion or sect. “Each man devoted to his own duty attains perfection,” declares the prophet of cosmic vision, Sri Krishna who continues to explain succinctly how this perfection is attained. He from whom all the beings have evolved and by whom all this is pervaded – worshipping him (God) with the due performance of his own duty, man attains perfection. (18:46)

Here, then, is a unique gospel which does not tamper with your station in life, distract you from your duties, disturb your faith nor lure you away from the path you have chosen but illumines your path and strengthens your faith. Its proclaimed object is to free you from worry and anxiety, to protect you from yourself – your own lower self, full of unruly desires and unjustified prejudices, deluded by ageless ignorance and therefore haunted by meaningless fears of imaginary calamities. In the Gita Dhyanam which is chanted before reading the Gita, there is a lovely verse. In it the Gita is considered the milk, the upanishad are compared to the cow and Krishna to the cowherd. The Indian cowherd never milks the cow till the calf has had some and thus inspires the cow to release the milk. Here it is Arjuna who serves that role. They whose intelligence is filled with goodness enjoy this drink. Please do not get the wrong impression that Krishna himself gave the teaching chapter by chapter: “That was the second chapter, and now begins the third chapter.” It was a continuing dialogue. If you understand that, you might also appreciate why the thoughts are all jumbled. For instance, karma yoga is discussed in the second, third, fourth and last chapters.

Scriptures have all been obviously put together by human beings however much you and I may wish to believe that they are direct revelations of God. Of course, it is God speaking through them – so on the one hand you can see that all teaching comes from God; on the other hand you can see that all teaching is man-made, polluted by human speech. The Yoga Vasistha says: ‘Study this scripture and you will be free. If you think that because it is man-made you have no faith in it, go and seek some other scripture, but find enlightenment.’ So, study the Gita, but stop the mind from selective understanding. If you are accepting or rejecting a scripture or a teaching because your mind likes it or dislikes it, you are in the same mill, going round and round and round, it is totally useless.

There is a great risk in trying to philosophies a teaching. A teaching is a teaching! The mind that wants to analyse that teaching runs into infinite, endless difficulty, because once you begin to analyse something there is no end to it. The teaching is totally outside.

Unity, diversity, perishable, imperishable, you, I, he, etc., are all words and ideas created by the mind, sustained by the mind and dependent on the mind. God is the dictionary in which all these words are found, and in which all these ideas can prevail. No word has a meaning built into it. The meaning of a word arises within you – often because of conventional usage, but always because of your understanding or non-understanding. Words have no meaning at all except to the extent that we intuit some meaning to them. We are so full of definitions and our own understanding, that it is impossible to teach us. It is our own understanding that receives the new knowledge and therefore it instantly becomes old. It is far easier to teach someone who is totally raw than someone who thinks he knows or can understand. Therefore Arjuna could not be taught until he collapsed.

Swami Sivananda once said: “If you want to become a professor, please go to the library and study all the commentaries on the Bhagavad Gita and write one of your own. On the other hand, if your main motivation in seeking to study the Bhagavad Gita is to practise it and attain self-realisation, then take one verse and live it.” Knowledge and action are not two divergent paths; they can be like railroad tracks – both of them leading in the same direction. The Yoga Vasistha says that a bird flies with two wings, not one. You must know what you are doing, and do what you know to be right.

We should take up the study of the Bhagavad Gita with humility, with an eagerness to know what this tiny little scripture has to offer us to enrich our lives, to enable us to become useful citizens and, by God’s grace, to know for ourselves what life is about. We are asked to study the Bhagavad Gita in order that the message may be incorporated in us so that it might become operative when the time arises – incorporated in the literal sense that it becomes part of the cells of our body.

Thousands of years ago there was a conflict between they who were called the Pandava and they who were called the Kaurava. One person cannot quarrel with himself. A quarrel or conflict means between two forces and a union means between two forces. Without this division there is no conflict – and no union! We are told that the Pandava had chosen lord Krishna to be on their side, not to fight on their side – Krishna was merely driver of an armoured car.

What has this to do with us? Is the Bhagavad Gita relevant to us? If it is not we are wasting our time, or, what is even worse, we might misinterpret the message.

It has a relevance to us because there is ongoing conflict in us. When you are not in conflict with anybody here, you experience conflict within when you recognise that experience is division, division means conflict; there is a division between the idea you have of what you should be and the knowledge you have of what you are. Is it possible for you to observe this division either arising or existing in you all the time?

The conflict (and its resolution) implies two forces. If in reality you are split into two forces, you cannot become reconciled. You cannot find this union within yourself unless you ‘die’ – then you (‘I’) do not exist! The entire Bhagavad Gita is an investigation into the question: ‘Is this split real?’ You experience this split, there seems to be this inner conflict. You cannot attempt reconciliation, a union, because any attempt at bringing it about pre-supposes a division. Therefore the scripture tries to divert your attention from either accepting or rejecting this division, and introduces a third approach – vicara, investigation. Instead of assuming that there is a division and that division must inevitably lead to conflict, is it possible to look into it? That is what Krishna tells Arjuna. And that is what is relevant to us in the daily battle of our lives. The reason why, perhaps, Krishna chose the battlefield to deliver this message! 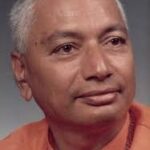 Swami Venkatesananda Saraswati (1921-1982), known previously as Parthsarathy, was a disciple of Swami Sivananda Saraswati. He received his spiritual training at the Divine Life SocietyRead more