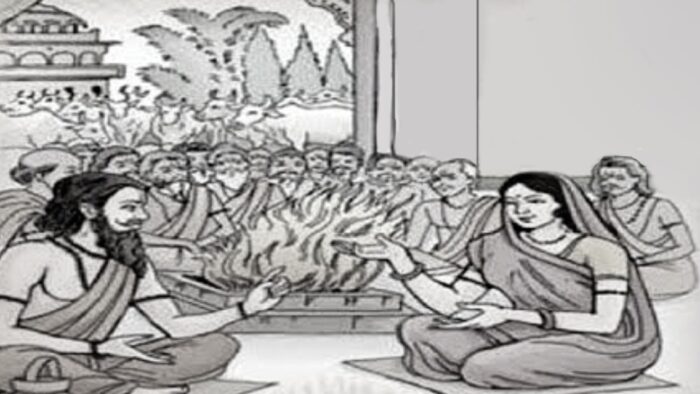 In the first part of overview essence of first six chapters was presented that contained - Introduction to the text & Tradition- Yamas(10), Niyamas (10), āsanas (8), Types of Nāḍīs, places and functions of prāṇas, Nāḍīśodhana - Means for Purifying the Nāḍīs, Prāṇayāmas (11) .

In this concluding part, overview of rest of the six chapters (Chapters 7-12) that discuss pratyāhāra, dhāraṇā, dhyāna & samādhi is being presented.

After discussing prāṇāyāma  in the previous chapter, this chapter is dedicated to the discussion on pratyāhāra. Five types of pratyāhāras are spoken here. Three initial approaches to Pratyāhāra are as follows –

a) withdrawal of senses from the objects

b) seeing everything in oneself and

After this, to state a unique , fourth kind of Pratyāhāra, the text enlists 18 Marma-sthānas (vital parts). The 18 Marma-sthānas are - Toes, Ankles, Mid-shank, beginning of the calf muscles, knees, mid-thigh, anus, middle portion of the body, genital, navel, heart, throat, palate, nose, eyes, place in between eyebrows, forehead, top of the head. (verses 5-16).

The method of practice of Pratyāhāra here is to hold the breath and move the focus from one Marma-sthāna to the other beginning from the toes of the feet. (This probably implies - inhaling and exhaling a specific number of breaths with focus on a particular Marma-sthāna. After that one should hold the breath and move focus to the next Marma-sthāna till gradually attaining the top of the head. During this practice the focus remains on the body and hence the senses do not wander away into other objects.  Hence this qualifies as Pratyāhāra. As a by-product, it could also be said that this also helps in relaxing these 18 regions that is spread across the entire body) (Verses 17-25).

After this, fifth approach to pratyāhāra is mentioned, which seems to be accessible only to advanced Yogins. The summary of the practice as stated in the text is as follows - one should inhale through both nostrils and place Prāṇa on the two sides of kuṇḍalinī and then – allow prāṇa to travel via suṣumnā and fix it in between eyebrows until the mind is dissolved. (Verses 26- 30). Probably this last method is learnt from a Guru, directly.

The next practice elaborated in chapter 8 is Dhāraṇā. Six types of Dhāraṇās are discussed here. The first approach - steady fixing of the mind on the ātman is Dhāraṇā. This is done by focusing upon the space of the heart. (Verses 1-3).

The second approach to Dhāraṇā is interesting. As can be seen from the table below, the body is divided into regions of five elements with respective presiding deities. This practice of Dhāraṇā involves fixing the mind in each of these regions (and moving  focus from region of one element to another from bottom to top). Additionally, Bīja letters are also used in this practice. (Verses 4-10)

The third approach to Dhāraṇā stated in the text involves the practice of six prāṇāyāmas and then visualizing that each of the region of the elements (mentioned above) is getting dissolved into their respective cause while mentally chanting Praṇava. At the end of the Nāda of praṇava, Lord Viṣṇu is visualized. (verses 11-15).

The next three types of Dhāraṇās are therapeutic in nature. The text states that - by doing Dhāraṇā in agni region  (refer table above)- Vāta problems can be addressed. By Dhāraṇā in Earth and water regions Kapha related problems are addressed and by Dhāraṇā in Vayu and ākāśa regions, vitiation of all three doṣas can be managed. It is to be noted here that, as is characteristic to the text, emphasis on the performance of Vedic Nitya-karmas along with these practices is given at the end(Verses 16-23)

1) Meditation Upon on Lord Nārāyaṇa  as not different from oneself in the lotus of the heart that has 8 petals.

4) Meditation in between eyebrows - upon ātman  - as shining motionlessly from the region of middle part of the body to the top of the head.

5) Fixing gaze in the tip of the nose. With a relaxed body one should meditate upon the lustrous supreme self and his identity with one's own self.

6) Meditation in the lotus of the heart, the nectar emitting, pure Paramātman as being the same as oneself. (verses 12-39).

It is finally stated that though there are many types of Saguṇa Dhyānas, six best practices have been mentioned. One should do these without attachment, along with performing Nitya karma (carrying out essential daily duties and responsibilities) to attain the state of Samādhi. (Verse 40- 44)

This chapter speaks about the eighth limb of Yoga - Samādhi. At the outset, Samādhi is described as - Equality/oneness of the individual with supreme self and also the individual self-finding itself within (pervaded by) supreme consciousness is (Verses 1-5).

It is advised that, to reach this state one should perform Nitya Karma and take the guidance of the teacher (in various practices that leads to this state).  In the same context, it is added that Samādhi is also shedding this mortal frame with full awareness. To this is is stated -  when death is approaching - one should face east or north  and assume the paryaṅaka āsana (in vajrāsana lying on the back)  and restrain breath and meditate on supreme consciousness and utter Om and leave the body. (Though the shedding of the mortal frame is stated in simple terms, it should be noted that only by leading a Yogic way of life all along, the approach of death and these practices at the time of departure can be put into practice)(Verses 5-19).

At the end of this description Sage Yājñavalkya states - “Gārgī   You can also do this”. He also adds that this is the combination (Samuccaya) of knowledge and action that leads to liberation. (Verses 20-23)

This is the penultimate chapter, where Gārgī    comes up with an interesting question. All along the text it could be seen that there is an emphasis on the performance of Nitya karma along with various Yoga practices. Hence Gārgī   asks Sage Yājñavalkya - “What is the expiation for non-performance of Nitya Karma?” (Verses 1-3). [6]

The answer given by Sage Yājñavalkya is worth noting - By practice of regulation breath, the results of Nitya Karma (cleansing of the mind/body) are attained. Hence no expiation is needed (if on some occasions Nitya karma is missed out by a practitioner of Yoga, prāṇāyāma would suffice) . But if one abstains from performing Nitya Karma considering it as a mere strain or pain - it is wrong. (This brings out the cleansing nature of both Nitya Karma and Yoga practices).(verses 4-10).

At the end of the discussion, all the ṛṣi who were also witnessing this conversation were asked to leave for their abode by Sage Yājñavalkya. Names of fifteen ṛṣis including viśvāmitra vasiṣṭha, gautama etc, who were in the audience are mentioned. After the departure of all the Sages, Gārgī desirous of having a recap of all the teachings received from Sage Yājñavalkya , salutes and  states that - “You have elaborately taught me Yoga with all the eight limbs. It seems I have forgotten them, can you kindly teach them once again in a concise manner.” Sage Yājñavalkya smiles with compassion and assures that he will teach the essence of Yoga in a brief manner. (Verses 11-21)

The assurance given in the last chapter by Sage Yājñavalkya  to teach the essential aspects of Yoga, forms the content of this Chapter. Indeed Sage Yājñavalkya teaches some techniques to Gārgī  . But those practices are for very advanced practitioners and they are in the form of hints. It seems, the intricacies of these descriptions are to be learnt from a teacher. Sage Yājñavalkya  states -  Be seated in Siddhāsana. By that Prāṇa  is controlled and Agni unites with Prāṇa in ten days. Such practices should be done three times a day. (Verse 1- 4)

Sage Yājñavalkya  also states that the Agni that has thus united with Prāṇa should be restrained in the navel region and meditation should be done on Kuṇḍalinī. (Verses 5-9)

By this meditation and Prāṇāyāma, Prāṇa becomes hot and Kuṇḍalinī is awakened.  Also, all the various Prāṇas in the body become active (Verses 10-14)

In this process, Prāṇa that has combined with Agni also heals all illnesses in the body and enters Suṣumnā. Prāṇa that has entered suṣumnā,  gradual travels through the heart, the region in between the eye-brows and finally reaches the top of the head. (Verses15-22)

During these processes, various powers manifest. When the Prāṇa traverses through the heart - subtle body is perceived. When Prāṇa reaches the region in between the eye-brows - glimpses of the ātman are pereceived. And finally, when the Prāṇa reaches top of the head - Siddhas/ sages are seen.   (Verses 23-31).

Sage Yājñavalkya advises Gārgī   that - At this stage - meditation  on Brahman has to be done and finally the Yogin should allow the Prāṇa  to leave the body through the top of the head. (Verses  32-36).

After giving these final teachings, it can be seen in the text, that Sage Yājñavalkya retires to a solitary place. It is also important to note that, after receiving these teachings, Gārgī   renounces and goes to a lonely forest hermitage for Yoga sādhanā . (Verses  37-47)

As stated in the introduction, from the overview above,  it would now have become amply clear that this is a unique text in many respects. This text stands as a testimony for Yoga for all genders way back in the 13th Century CE.  It could be noted that karma which involves Vedic practices such as sandhyāvandana etc is emphasized repeatedly. This clearly indicates that Yoga was not something outside to the framework of Vedic tradition. It is an integral aspect of Sanatana Hindu Dharma.

It could also be seen that unlike later Haṭhayoga texts, mortifying practices such as Vajrolī , Khecarī  etc do not find a place in this text. This also helps in making Yoga more approachable to common men. Also cleansing Kriyās are not found in this text.

The fact that Prāṇāyāma has been given utmost importance here is worth to be noted. It is mentioned earlier that three chapters (4,5,6) are devoted to Prāṇāyāma. In our current times where bodily postures are emphasized a lot in Yoga, this approach of the text is worth internalizing.

It seems that because of these virtues and values that this text possesses,  Yogacarya Sri  T Krishnamacharya greatest among the Yogins in the last century, father of modern Yoga, taught this text especially to his students and encouraged the use of techniques and practices prescribed herein.

Thus these aspects about this text highlight the need for the study of Yogayājñavalkyasaṃhitā by every practitioner of Yoga in our current times.

[6] This is a very relevant question for practitioners who are followers of Sanatana Hindu Dharma who practice Sandhyāvandana (sun salutation in morning and evening) and other forms of daily worship. Even for followers of other religions who have a daily routine of prayer this question is relevant.