Ayurveda and Systems Theory: Professor Alex Hankey on the Profoundness of Indian Medicine 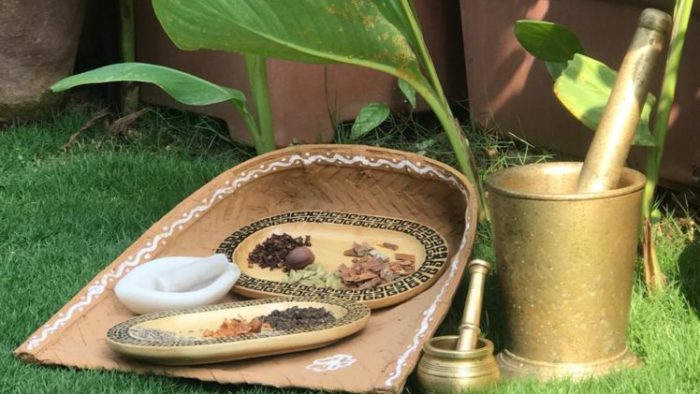 During that World Peace Assembly, Maharishi sent many of his teachers to visit India’s leading Vaidya, elevated Brihaspati-Dev Triguna, who had taken their pulse, his usual method of diagnosis, and been impressed at the levels of consciousness that he detected.

This eventually set the scene for Maharishi to set about reviving Ayurveda in 1985. In this context, we all attended Maharishi’s Christmas to New Year ‘World Peace Assembly’ in the Hague, Holland, in 1985, where we found ourselves being given our first systematic lectures on Ayurveda. We were all instructed to purchase and read Vaidya PV Sharma’s English translation of Ayurveda’s oldest text, Charaka Samhita. But only medically qualified people, doctors and an occasional dentist, who were already teachers of his Transcendental Meditation technique, were allowed to begin to learn to practise Ayurveda.

I still remember the first lectures in which Vaidya Brihaspati-Dev Triguna illustrated the power of Ayurveda as both a system of medicine and veterinary science with a series of three stories about Jivaka, physician to the Buddha, and patron of Ayurveda in Thailand, to which he had travelled, after the Buddha passed on. One story told how Jivaka had first become the King’s physician, after outwitting the King’s 100 Vaidya’s in a public contest, by answering all the Vaidya’s questions, and then asking a single question on which they could not agree the answer: what three things does Ayurveda recognise as good for every disease? Answer: Sunshine, pure water, and an early morning walk.

Another story told how Jivaka correctly identified an elephant’s footprints as being those of a female about to give birth to a male calf. To silence the jeers from his fellow students, his teacher, Maharishi Sushrutha, sent the group back to the site of the footprints with instructions to follow the spoor: a female with a new born male calf were indeed found.

Jivaka was asked to explain: he stated that one can distinguish male from female elephant footprints by their size; between an ordinary female and a pregnant female, by their depth in soft ground or mud; and between a male and female calf by the side on which it was set – the pregnant female’s footprints had been deeper on the right side, indicating that the calf was male; finally traces of amniotic fluid on grasses beside the track told Jivaka that the waters had broken and the calf was about to be born.

In practice, Ayurveda is distinguished by similarly acute observations of disease. For example, a colleague in Mysore, Professor Shantala Priyadarshini, has shown that for infectious diseases, Ayurveda correctly distinguishes viral and bacterial diseases (based on means of propagation), giving different names to the two kinds of infectious agent. This amazing fact does not seem to have been recognized by translators of Ayurveda’s main texts, however. There is no hint of such insights in their translations. Needless to say, I became hooked and an ardent fan of Ayurveda, despite not being able to practice it, since my PhD is in physics.

In 1988, a ‘Pioneers’ course in India led to increased interest in Ayurveda. Balraj Maharishi, Adviser on Ayurveda to the Government of Andhra Pradesh gave lectures on Dravyaguna, Ayurveda’s system of herbal medicine. After that, Maharishi authorized his medically qualified trainee Vaidyas to treat illnesses as well as using Panchakarma to strengthen the physiology. The following year, in 1989, I was privileged to take a course on Nadi Vigyan, Ayurveda’s system of pulse diagnosis, taught by Vaidya JR Raju, leading disciple to Balraj Maharishi.

That course convinced me of the profundity of Ayurveda, and of its ability to cure the chronic diseases that are the bane of modern civilisation. I vowed to work out the relationship between Ayurveda and modern biology, and began thinking about the problem on a continuous basis.

I got no clue for two years until a London lawyer attended a weekend course that I was helping organise at our community in North-West England, the Maharishi European Sidhaland in Skelmersdale, Lancashire, outside the City of Liverpool. “I saw a letter in the Times that I thought would interest you”, he said (no doubt a ‘little bird’ told him). “It said that the three fundamental systems functions in the human body are Input / Output, Turnover, and Storage”. I immediately uttered a loud, internal “Eureka”. Here was the clue that I had been praying for. I already knew that Ayurveda had three fundamental concepts, its three Doshas, Vata, Pitta and Kapha, in terms of which it explained all major physiological functions at all levels of the organism, whole system, organ subsystem, organ, tissue and cell.

Here was the clue that I needed to draw up the first rigorous relationship between modern biology and Ayurveda. Vata Dosha, dominant in the kidneys, colon and rectum, regulates input/output, Pitta Dosha, responsible for digestion and metabolism, controls turnover, while Kapha Dosha, recognised to concern lipids and sugar molecules, is responsible for energy storage.

On this basis, many other aspects of Ayurveda could be explained, including Ayurveda’s explanation of aetiology in terms of ‘Six Stages of Dosha Imbalance’, Shat Kriya Kala. It clearly refers to stages of loss of precision of regulation. I immediately stopped work on an education project, and devoted the next three months to furthering my understanding of these new correspondences between Ayurveda and modern medicine that had come to me.

Systems theory makes it seem deep, holistic approach to systems biology, very different from the way that systems biology is ordinarily formulated. Western scientists are completely imbued with the idea that its parts are fundamental to a system, rather than the range of processes occurring within it. As a result, they consider the smallest systems that they can identify, fundamental, and do not realise that the overall system, maintaining the integrity of its own functioning has its own fundamental value. They fail to ‘see’ and understand this fact.

Systems biology is well established, but systems concepts have mostly been applied to isolated systems, not systematically to the whole organism. I was able to visualise that, with persistence, I would be able to work out the full relationship between Ayurveda and modern science, and eventually explain the means to cure chronic diseases in western terms. The following year, in 1993, I was able to spend six weeks at the campus of Maharishi International University in Fairfield, Iowa, and to work out many more details of the relationship that I had first envisioned between Ayurveda and modern biomedicine.

Not being in publishing mode, the hundred pages of notes that I then made on my Macintosh computer remained unpublished, but they became the basis for all my future work in the area, including all my published scientific papers on the subject, of which more in later articles in this series. Ayurveda has been a central interest in my research over the last twenty years. I continue to refine my understanding of its hidden depths with the help of friends and colleagues around the world, many of whom have helped me develop the story of its relationship to biosciences.

(This article was first published in the Goan Observer)