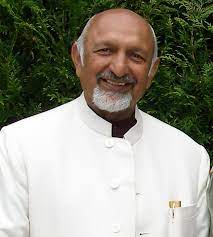 Founder and director of Tapovan Open University of Yoga & Ayurveda, a bridge between East and West

Kiran Vyas is from Gujarat in India. A former student of the Sri Aurobindo International Education Center in Pondicherry, he founded three experimental schools with his father who was one of Mahatma Gandhi's closest collaborators.

Kiran Vyas then chose France to promote the influence of this "science of life" that is Ayurveda.

His scientific training, his pedagogical sense, his keen interest in the evolution of body and mind as well as his creativity led him to develop Tapovan into an "Open University" open to all, promoting "interdisciplinary" exchanges and “intercultural”.

Kiran Vyas was the precursor of Ayurveda in Europe; it was he who introduced it in the early 80s, when no one yet knew what Ayurveda was. He is recognized as a major player in the teaching of this art of living in the service of well-being and personal development, this nearly forty years. Today, in Tapovan Paris or Normandy, the Kiran Vyas team invites you to a privileged encounter with yourself.