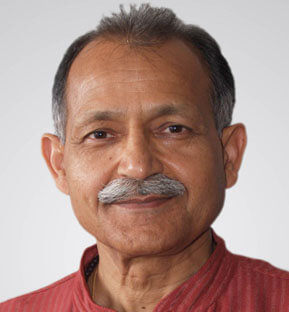 Diplomat turned Yog Guru: Chandra Mohan Bhandari, a former Ambassdor of India, an Honorary Professor of Opole Polytech University, Poland, and an International Yog Grand Master, has had a brilliant educational career. He got his Master in Physics degree from I.I.T., Kanpur in 1970 and joined the Indian Foreign Service in 1974. Though he is widely travelled overseas because of his diplomatic career, he throughout his career held his personal life closely wedded to Vedic Sciences. He studied Vedic texts in his free time and through his own experiences after sustained practice of the many Yogic Kriyas, quantified deep holistic health and wellness benefits besides spiritual realizations. This was clearly visible in his public personality, which deeply influenced public opinion about holistic health and wellness advantages from living by Yog and Ayurved sciences. This led C.M. Bhandari to establish the Institute of Vedic Sciences at his Devamber Dham Arogya Ashram in Kashipur in February 2020. Before that, he had established a small scale Devamber Arogya Dham Ashram in June 2012 in his native village Mawra in Ranikhet Tehsil of Almora district in Uttarakhand. C.M. Bhandari has designed five modules of 10 hours each for practical experiences of benefits from Yog and Ayurved Sciences.